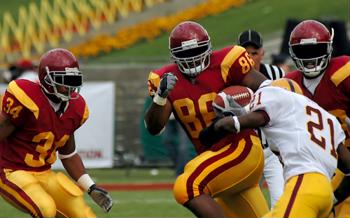 Anyone who has ever watched a game of tackle football knows how easily head injuries can occur in this rough-and-tumble sport. While athletes typically receive medical treatment following a serious injury on the field, they may not realize how long complications from blows to the head can linger.

New research from the Department of Medicine at Imperial College London provides insight into the types of brain abnormalities that could be present in former professional football players. In the study, researchers worked with data from 13 former professionals from the National Football League, as well as 60 healthy volunteers.

Participants took a test and had their brain activity measured. This allowed researchers to observe unusual patterns in the brains of the former football players.

"The critical fact is that the level of brain abnormality correlates strongly with the measure of head impacts of great enough severity to warrant being taken out of play," said Adam Hampshire, the study's lead author. "This means that it is highly likely that damage caused by blows to the head accumulate towards an executive impairment in later life."

Based on these findings, individuals who injure their head more than once may want to take an IQ test to see if there have been any long-term effects in terms of their cognitive abilities.