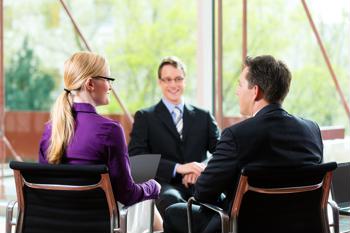 The more desirable the job opening, the greater competition applicants are likely to face. Now, however, new research suggests that when multiple individuals interview for a job on the same day, they are compared to one another, rather than being evaluated on how good of a fit they are for the position they applied for.

More competition means slimmer odds
In a study from researchers at The Wharton School of the University of Pennsylvania and Harvard Business School, data from more than 9,000 Master of Business Administration interviews was reviewed. Even though the study focused on academia, the researchers said its findings can be applied to interviews that take place during the job search.

"People are averse to judging too many applicants high or low on a single day, which creates a bias against people who happen to show up on days with especially strong applicants," said Uri Simonsohn and Francesca Gino, the researchers behind the study.

If an interviewer had already given candidates from earlier in the day high marks on their performance, they were less likely to do the same for individuals who were coming in later. Based on the results of this study, job seekers may want to be wary of interviews that are scheduled for later in the day.

How job seekers can handle heavy competition
Of course, it will not always be possible for individuals to decide what time of day their job interview takes place. This is especially difficult when a particular position is in high demand. However, there are ways for candidates to stand out when they face fierce competition.

According to U.S. News & World Report, one thing job seekers should try to do is forget about all the other people interviewing for the position they want. There is a good chance several people will interview before and after a candidate's own meeting. This is out of applicants' control and, as a result, not worth dwelling on. With negative thoughts out of their mind, people will be better able to focus on leaving a good impression.

Something else that could increase job seekers' chances of landing their ideal job is taking a career test. When they know what type of role they are better suited for, they could end up interviewing for an opening they will quickly fill.