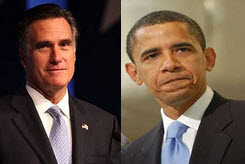 President Obama has a clear lead among Internet users when we asked the question "Which Candidate for President do you think has the higher IQ?" Respondents selected Obama over Governor Romney by a 3-1 margin, 74-26 percent.

When the group knew about both candidates' Harvard backgrounds, the results were closer, with Obama edging Romney by a 3-2 margin, 60-40 percent. One commentor who picked Romney said: "Getting both a JD and an MBA seems like it would take a lot of brain power."

In our survey to gauge perception of the Vice Presidential candidates, one respondent claimed: "Ryan seems a lot smarter than Obama and Biden combined." But in the end, the Democratic ticket has the highest perceived IQ, with Biden leading Ryan almost 2-1 at 64-34 percent.

What do you think? Take the poll and let us know which candidates you think have the highest IQ.

And let us know your opinion with a comment below.

4 Responses to Who is Smarter: Romney or Obama?