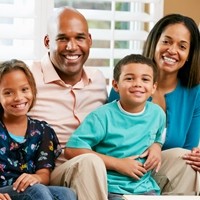 By FunEducation News on June 10, 2014 in Kids IQ Test Information

Psychologists have long debated whether genetics or environment influence the way a person develops. More specifically, some professionals have wondered if nature or nurture determine a child’s IQ score. In all facets of psychology, the answer isn’t clear-cut, and most believe the mind and personality form as a result of both types of influence. Here’s a closer look at nature and nurture as they relate to a child’s IQ:

Caps set by genetics
Most psychologists believe that heredity influences intelligence by setting limits, a concept called reaction range. Basically, children can only be so much more or less intelligent than their biological parents, thanks to their genes. Studies conducted on fraternal and identical twins support this idea. Identical twins (who share DNA) tend to have IQ scores that are the same or, at least, very close. Fraternal twins, on the other hand, display a greater gap in intelligence. Even when raised apart (meaning they’re exposed to varying environments), identical twins have remarkably similar IQ scores.

Studies conducted on adopted children have revealed that kids who grew up apart from their biological parents still closely resemble their parents’ intelligence.

The effects of environment
While genetics determine reaction range, it’s nurturing that allows children’s IQ to fluctuate within the range’s limits. Psychologists have determined this by looking at similar studies to those that evaluate heredity. For example, adoption studies have revealed that children’s IQ, while similar to their biological parents’, more closely resembles that of their adopted guardians. Additionally, when siblings are raised together, they tend to have a more similar intelligence than if they are raised apart.

As you can see, study results tend to be confusing. Some seem to support genetics while others indicate that environmental influences are more pertinent. For this reason, psychologists can’t seem to come to an agreement. However, some environmental factors clearly have a powerful impact on IQ.

Toxins in the environment are one such category. Early exposure to toxic substances can decrease a child’s IQ score, or prevent it from developing to its full potential over time. For example, a study published in the Journal of Public Health Policy estimated that if New York City was able to decrease its levels of pollution, children living there would have a higher IQ. Air pollution contains high amounts of polycyclic aromatic hydrocarbons (PAH), chemicals that are released during the burning of fossil fuels. A study conducted by the same researcher found that PAH is also in cigarettes, and if women smoke while pregnant, their children will have a lower IQ than other kids.

History of IQ test
The factors that go into measuring IQ