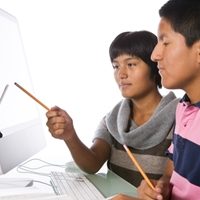 By FunEducation News on September 10, 2021 in Kids IQ Test Information

If you have multiple children, at some point they’ve likely argued over who is smarter. As a parent, you probably replied that they are equally intelligent to encourage both and avoid further dispute. In reality, though, science may show that the eldest sibling is likely to be the smartest.

Here are two ways to estimate your IQ score.

Read on to learn about research into how birth order affects personality and intelligence.

Birth order and intellect
A study published in the Proceedings of the National Academy of Sciences of the United States of America looked into the connection between birth order and a persons’ life. The study looked at national panels of participants from the U.S., Great Britain and Germany. Some were within the same family and others were the only member of their family involved in the panel. The study asked participants to self-report on their intelligence and younger siblings tended to estimate they were around 1.5 IQ points less intelligent than their older siblings.

The study also looked into personality factors, emotional development, agreeableness, imagination and conscientiousness but did not find that birth order had any effect on these aspects of a person. Only intelligence was altered with the eldest child being the smartest and each successive kid self-reporting slightly less intelligence.

The Atlantic looked into reasons why older kids may be smarter. They, too, found the no one to teach theory, but also noted several more ideas. One postulated that a couple’s first child receives the best genes and subsequent kids simply have less intellect due to their second-string DNA. Another option is that many couples divorce after a first child, therefore affecting any siblings after the eldest because they are in a totally different home situation. The divided-attention theory is another popular option. It states that the first-born child receives the most attention. With two kids, each receives half their parents’ consideration; add more kids and that percentage decreases drastically with each sibling.

Birth order and aspirations
A 2014 study at the Institute for Social and Economic Research University of Essex used information from the British Household Panel Survey, representing around 10,000 individuals. The researchers found that first-born children are likely to have higher aspirations than their younger siblings. The scientists also noted that older siblings were 7 percent more likely to continue their education for longer than any younger brothers and sisters. At the time of publication, 40 percent of the study participants were attending higher education. The researchers plan to continue following their progress and learning more about birth order and aspiration through additional research on the same group of people.

Navigating having multiple kids
Parents can mitigate the effects of some of the above theories to ensure all your kids are properly educated and reaching their full intellectual capacities. For example, you can spend individual time with your younger children to ensure that they are receiving ample attention and assistance with their schoolwork and overall growth and development. Encourage your older kids to help their siblings as this will improve the entire family’s intellect, and it’s a great way to learn social skills and leadership.

It’s also important to understand that your children are individuals. This means they are likely at different levels of intelligence regarding every aspect of their formal and informal education. Your oldest son, for example, may be a whiz at spelling and reading while your younger son prefers reciting the periodic table of elements. These are both areas of intellect that are important during school and outside of the classroom. Try to encourage your kids to learn in areas they are not great at as well as those they are interested in. This way they’ll achieve a balance and improve as a whole instead of sticking to specific topics. As for the age-old, “I’m smarter!” “No, I’m smarter!” fight between your kids, you can keep the answer to yourself!