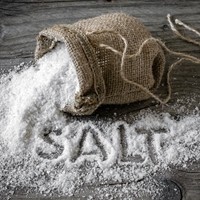 By FunEducation News on August 20, 2015 in Kids IQ Test Information

Proper nutrition helps create a strong and healthy body, for both children and adults. However, it's more detrimental for children to lack proper nutrition because they are in a delicate developmental stage. It is especially vital that kids receive the right nourishment when they are in the womb, which means mothers need to be consuming the right foods or taking supplements to stay healthy. One supplement that some doctors believe every woman should take is iodine. This is because a recent study published in the journal The Lancet Diabetes and Endocrinology, reported that insufficient amounts of iodine can actually impact a child's IQ scores.

Benefits of iodine supplementation
The study examined clinical data on iodine deficiency in pregnant women and the effect it had on children once they reached the age of 8 or 9. The analysis estimated that iodine supplementation during pregnancy could increase a child's IQ scores by about 1.22 points.

Increasing a child's IQ was not the only benefit of the supplement, either. Higher IQ scores have also been linked to better health and increased incomes later in life. Mothers who take iodine supplements will not only be helping themselves stay healthy, but may also aid in their children's future success.

Who needs more iodine?
According to a report from Micronutrient Initiative, it is estimated that around 18 million babies are born mentally impaired because of iodine deficiency. In America, the problem of iodine deficiency has been mostly solved with the addition of iodine to salt, or salt iodization. Now, when people eat their meals, they can get a portion of their daily iodine intake every time they use the salt shaker. However, other countries, like parts of Europe, Africa and Asia still experience problems with insufficient amounts of iodine.

Many people suffer from inadequate iodine consumption each year, and even in the U.S. iodine is one of the nutrients most often deficient in a person's body. According to BabyCenter, pregnant women need about 220 mcg of iodine each day, while women who are breastfeeding need around 290 mcg. To get the suggested amount of this nutrient each day, women can eat:

Women can start taking supplements before and during pregnancy to maintain appropriate iodine levels. However, pregnant women who are thinking about taking these vitamins should talk to a doctor to see which ones would be best for their body. Some dietary supplements already contain small amounts of iodine, so adding more to a diet could become harmful.