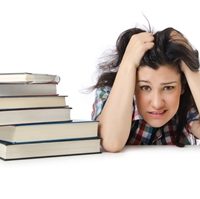 By FunEducation News on September 9, 2014 in Kids IQ Test Information

When most people picture a child who has a very high IQ, they might envision someone who has it all together. This student might be at the top of his or her class, enrolled in advanced courses and a leading member of clubs and activities. However, this picture of the hyper intelligent student isn't necessarily accurate on all accounts. Students who have a high IQ can experience lack of motivation and focus just like others. In fact, according to a study conducted by Yale University researchers, students who have impressive IQs are just as susceptible to attention deficit hyperactivity disorder (ADHD) and attention deficit disorder (ADD) as other children.

A word on ADHD
​According to the National Institute of Mental Health, about 4.1 percent of U.S. adults and about 9 percent of children between the ages of 13 and 18 have been diagnosed with ADHD. It is one of the most common disorders that affect children. ADHD impacts a person's ability to control his or her behavior, which can translate to a lack of focus, hyperactive behavior and impulsiveness. This disorder commonly impacts the person's academic, career and social lives, often in a negative way. Furthermore, ADD and ADHD refer to the same condition.

IQ and ADHD
The stereotypical view of highly intelligent people is that they are motivated and focused, which seems to be in contrast with the behaviors generally associated with ADHD and ADD. Many people expect the genius child to perform well in school and go on to earn millions of dollars. However, this picture alienates or ignores children who are both very intelligent and have ADHD or ADD.

Yale researchers observed 117 students between the ages of 6 and 17, all of whom had an IQ score within the top 9 percent of the population. Additionally, each participant met the criteria for an ADD diagnosis. The students were given an IQ test that also measured narrative recall and the ability to perform tasks while frustrated. Researchers discovered that these students, who had very intelligent minds, suffered the same setbacks that any other student with ADD would experience. For instance, the students tended to score highly in most areas of the IQ test, but underperformed in areas that assessed working memory and processing speed.

"When children and adolescents with high IQ and ADD are struggling with their studies, parents, teachers and physicians tend to blame their difficulties with focus and output on laziness or lack of motivation," Thomas E. Brown, assistant clinical professor of psychiatry, associate director of the Yale Clinic for Attention and Related Disorders and senior author of the study, said in a statement. "They assume that a high IQ student cannot suffer from ADD."

This study demonstrated that students with ADD or ADHD can be highly intelligent.