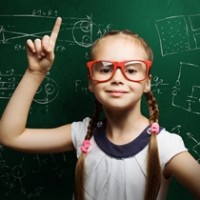 If your child has shown signs that he or she may be intellectually gifted, you've probably heard the term "Mensa." It's likely you may have even been told to have your child tested to see if he or she could get in to this exclusive organization. You may be hesitant, though, especially if you don't know just what Mensa is. Here is an overview to help you better understand and consider having your child reviewed:

What is Mensa?
According to Mensa International, the organization is a society for people with high IQs. It was founded in 1946 with the idea to allow anyone in the top 2 percent of intelligence throughout the world to join together and enjoy each other's company. Not only does the society promote meeting and communicating with one another, but it also encourages research and works to stimulate its over 120,000 members across the world. There are no rules for getting in besides having a score at or above the 98 percentile on a standard IQ test. All ages, races, genders and religious affiliations are welcome.

Should my child be tested?
If your son or daughter has shown signs of high intelligence levels, you may want to have him or her tested. This can give you insight into just how smart he or she is. Knowing a standard IQ test score will help you to find the best grade and school for him or her to attend. You may also have a better understanding of your child​'s behavior and be able to introduce him or her to individuals that are intellectually similar. It is likely he or she has trouble relating to others of the same age group because of his or her intelligence.

What is the test like?
Testing to become a Mensan involves going to a Mensa office and taking an IQ test. Many tests must be taken by people over age 16, so if your child is younger than that, be sure to call ahead to procure the proper test. You can also show the Mensa office staff certified copies of IQ tests from school so long as these documents have a school seal. If your son or daughter has been tested by a psychologist or an agency, these tests may also be considered so long as the proctor was qualified for private testing. Call your area Mensa office with any questions regarding past tests or getting your son or daughter tested at the facility.