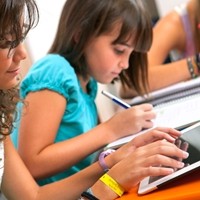 By FunEducation News on July 27, 2015 in Kids IQ Test Information

Parents with kids old enough to attend school have a tough decision to make: when to start their kids in kindergarten. For most, the decision is relatively easy, but for parents who have a child who barely makes the age cutoff, the choice of whether to wait a year or enroll them young can be difficult. Many parents believe it is better to wait until children are six years old because they see it as a chance for the child to mature and develop a little more. The New Yorker stated that athletics is another factor parents take into consideration when delaying school, reason being the extra year can give kids time to grow. Parents may see waiting a year for school as a benefit to their child, but research shows that younger children may actually perform better academically.

Is younger better?
A study by the National Bureau of Economic Research found evidence of a positive effect on IQ scores from starting school early. The results were determined based on high school IQ scores when students were 18. There are several benefits that can come from starting a child in school early. For instance, kids learn how to interact socially at a younger age and learn to adapt to new situations. This is also a crucial developmental period of a child's life, and being exposed to new experiences can help them learn more about the world.

Another study by the Forschungsinstitut zur Zukunft der Arbeit Institute for the Study of Labor analyzed age differences in college students. The age gap between the youngest and oldest participants of the study was 11 months. The results of the study noted that the younger students performed better on cognitive tests than their older peers.

As the studies show, starting kids at a younger age has its advantages, but there are also a few downsides. One of the disadvantages is that older children are often more aggressive and outgoing, causing them to fall into leadership roles more often than younger kids. Older children also have an advantage over younger students when it comes to following directions, as younger children may become more easily confused.