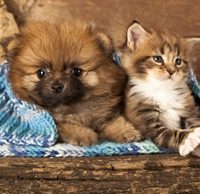 By FunEducation News on April 25, 2015 in Kids IQ Test Information

Are you a dog person or a cat person? Ask this question to any group of people, and it's sure to illicit passionate responses. But a 2014 study found that a person's pet preference may have something to do with his or her intelligence. So which animal had the smartest fans? Here's what the study found:

Cat lovers may be more intelligent
The study, which was presented at the 26th annual Association for Psychological Science held in San Francisco, surveyed 600 college students on their pet preferences. Researchers at Carroll University in Wisconsin gave participants detailed surveys in which they asked personality-trait questions, whether they considered themselves a dog person or a cat person and what most attracted them to their chosen pet. They also administered intelligence tests. The results? Though nearly six times the amount of people in the survey liked dogs more than cats, those who preferred cats scored overall higher scores on the intelligence tests.

There were clear personality differences between the cat and dog enthusiasts as well. Whereas dog lovers were found to be more lively and outgoing, cat lovers were a little more introverted and sensitive, though scored higher in open-mindedness.

Denise Guastello, the study's lead researcher and associate professor of psychology at Carroll University, said at the conference that the personality traits fit well with what one would expect, according to LiveScience.

"It makes sense that a dog person is going to be more lively, because they're going to want to be out there, outside, talking to people, bringing their dog," Guastello said. "Whereas, if you're more introverted, and sensitive, maybe you're more at home reading a book, and your cat doesn't need to go outside for a walk."

Do cat lovers really have a higher IQ?
Because the study was administered to only college students, it's hard to tell if the findings would apply outside of that arena. However, there have been other studies regarding the differences between dog and cat devotees that may tell a similar story. A study published in the Veterinary Record journal in 2010 looked at nearly 3,000 households in the U.K. and found that households with cats were more likely to be home to someone with a degree than households with dogs.

These findings, of course, don't mean that every cat owner has a high IQ score, and every dog owner has a low IQ score. Instead, it may indicate a relationship between the personality traits of these pet owners and intelligence. Are introverted or sensitive people more likely to have higher IQ scores? That's a question that could be tackled by further studies.