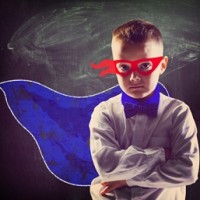 By FunEducation News on April 28, 2015 in Kids IQ Test Information

When it comes to finding intelligent role models for children, superheroes can be a great place to start. Many kids already love superheroes for fighting the “bad guys” and saving the world. So, when these fictional characters use their extreme intelligence to help them battle evil forces, it can make being smart, well, cool. If your children are gifted, looking up to superheroes can help them feel proud of their intelligence! Many may have even taken one of the top 5 college majors by IQ.  Take a look at these five superheroes who are known for having genius-level smarts:

1. Iron Man (Tony Stark)
What’s cool about Iron Man is that he’s just a normal human guy with no true superpowers. In effect, Tony Stark’s intelligence is his superpower, because it allows him to build his iron suit and the weapons he uses to fight his nemeses. Stark started inventing when he was just 3 years old and attended the Massachusetts Institute of Technology at age 15. By 21, he’d earned two master’s degrees – oh, and he even invented a new element.

2. Batman (Bruce Wayne)
Like Tony Stark, Bruce Wayne was just a normal man who used his genius to become one of the most famous superheroes of all time: Batman. Wayne’s an inventor, but he’s also an expert in chemistry, forensics and outwitting evil opponents to save the world.

3. The Hulk (Bruce Banner)
The Hulk may seem like he’s brawns over brains, but in reality Bruce Banner was a highly skilled scientist before he became the fierce superhero. In fact, Banner had a doctorate in nuclear physics! Plus, before he gained superpowers, he was using his intellect to test weapons for the military.

4. Professor X (Charles Xavier)
Professor X, the founder and leader of the X-men, isn’t just super because of his extreme mind-reading powers. The genius superhero graduated from Harvard University at 16, and holds five doctorates from Oxford and Columbia in genetics, biophysics, psychology, anthropology and psychiatry. Now that’s intelligent!

5. Mister Fantastic (Reed Richards)
The superheroes who make up the Fantastic Four are all smart, but the ringleader, Mister Fantastic, is a true genius. Like others on the list, Reed Richards attended college at a young age. In fact, he earned several degrees from esteemed universities like Harvard, Columbia and the California Institute of Technology. A child prodigy in math and physics, Richards has used his intelligence as an inventor and engineer, and to make huge breakthroughs in scientific fields, like space and time travel.

Felix vs. Fido: Do cat lovers or dog lovers have a higher IQ score?
EQ or IQ: Which matters more?