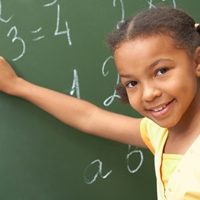 By FunEducation News on September 14, 2016 in Kids IQ Test Information

Have you ever wondered about other kids out there like your gifted children? Depending on where you live, you may have never interacted with parents of gifted children. Your kids may not have met people their age who are also highly intelligent like themselves. If you want to learn more about the population of gifted kids in the U.S., read on.

How many gifted kids are there?
According to the National Association for Gifted Children, there are around three to five million gifted kids between kindergarten and 12th grade in the U.S. This is difficult to quantify because there is no section of the census asking if you have children who qualify as gifted. Instead, the estimated population is based on the growing amount of gifted and talented classes that are popping up across the states to cater to the needs of kids who learn at a higher level than their peers.

The National Center for Education Statistics broke down the population of gifted and talented students in US schools during the 2004 and 2006 school years. The organization estimated that the population was 3,202,760 in 2004 and 3,236,990 in 2006. The highest concentrations of gifted children were found to reside in California, Texas and North Carolina. These numbers were based on universe counts of schools and school districts. Do they truly reflect the total amount of gifted kids in each state or just that the states offering the most resources for gifted and talented kids also seem to have the most gifted kids? The one fact uniting both the 2004 and 2006 data is that the numbers of gifted kids grew. This may indicate improving intellect or access to gifted and talented programming.

What resources can parents and gifted kids access?
While it's nice to know there are other parents and kids out there navigating the world with extra smarts, that doesn't necessarily mean you have anyone near you to talk with. If you or your gifted kids want to network with others in similar situations, consider turning to the web. There are many organizations, like the NAGC, that can unite you with other people who have gifted kids or are gifted children themselves.

Parents can benefit from these relationships by talking about education and learning how to improve their gifted kids lives. Children appreciate knowing there are other kids near their age who are learning on a much higher level than their peers. Because children are in a crucial period of social growth, it's very important for them to know they are not alone and to have people to commiserate with. Since this is not always possible in real life, no matter where you live, online support groups and forums for gifted families can be great resources. Just be sure to seek ones through reputable sources such as the NAGC, Support Emotional Needs of the Gifted or similar organizations. Also consider checking with a local college or university as they may offer helpful resources as well.