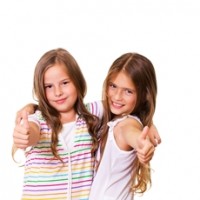 By FunEducation News on January 22, 2015 in Kids IQ Test Information

Humans are a social species, so people of all ages and intellects need friends. As a child, you learn how to make friends and find a group of people with which you identify. However, highly intelligent kids often face challenges when finding others they can call friends. Despite that, they do still need to meet others their age.

Tendencies of high IQ kids
According to a study published in the Roeper Review, highly intelligent children have similar social patterns to their peers who are less intelligent. Researchers had children complete surveys to ascertain how they behave socially. Kids with a high IQ consider themselves friendly, enjoy playing with kids their age and play with the same frequency. The major difference between average kids and gifted children is the process of making friends.

Most of the kids in the gifted group reported having trouble making friends, even though they considered themselves just as, if not more, friendly than their peers. Kids in this group said that being smart made it difficult to find friends. Their parents reported that their intelligent children had few friends with whom they played only once a week. Some parents even said their child had no friends. Children with high IQ who had friends tended to play with kids older than themselves.

The challenges of building relationships
Being highly intelligent can be a good thing, but for many gifted people, not having strong relationships is a pain point. Mensa, the society for highly intelligent people, noted that many gifted individuals feel like they don't belong or don't have anyone with whom to identify. Children may have a more difficult time with this than adults – grownups can choose who they'll be around and what types of groups they'll seek out, while kids are often limited in friend selection to those they meet at school.

Many kids with high IQ simply can't relate to their peers. Other kids at school might talk about the latest episode on a TV show or a song that's popular. Gifted children may enjoy these things, but oftentimes, their interests are different, so they don't have something to discuss with other kids.

Making friends
All this is not to say gifted kids can't have strong relationships. On the contrary, they can find friends to whom they feel close. Consider enrolling your child in clubs and activities where other intelligent kids might congregate. Encourage your child as he or she starts developing a relationship.