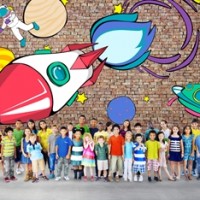 By FunEducation News on December 11, 2015 in Kids IQ Test Information

NASA is one of the most well-known, fascinating organizations in the country. Children and adults both tune in for rocket launches and televised meetings about the International Space Station. Just about everyone has watched an astronaut drinking water globs as they float about the inside of a space ship or bit into rock-hard astronaut ice cream. Gifted children are particularly inclined to fascination with space. Here are some NASA facts for your gifted children:

NASA was created on Oct. 1, 1958
The acronym stands for the National Aeronautics and Space Administration. Before NASA, President Woodrow Wilson started the NACA, or National Advisory Committee for Aeronautics. The group had a similar role to NASA before spaceflight gained traction. NASA was created one year after the Soviet Union launched Sputnik 1, the world's first satellite.

The word "aerodynamics"comes from two Greek words
"Aerios" means concerning the air and "dynamis" is powerful. The combination, aerodynamics, is the study of objects in motion through air and forces. While most elementary and even high schools don't offer aerodynamics classes, physics courses do cover some principles that are important in the specialty, such as Newton's Law.

Space shuttle astronauts get 3.8 pounds of food per day
One of those pounds accounts for packaging as everything is wrapped in individual servings. There is no refrigeration on NASA space shuttles, so all foods are precooked. Fresh foods are kept in a specific area that promotes a shelf life of 2 days. While taste is important, all meals must be easy to eat without gravity.

The first woman to walk in space did so on Oct. 11, 1984
Katherine Sullivan is a much less famous name than Buzz Aldrin and Neil Armstrong, but she too has walked in space. As the first woman to take these historic steps, she and another astronaut spent 3.5 hours participating in an Extravehicular Activity to show that refueling a satellite from outside the shuttle was possible.

If your gifted children enjoy learning about NASA, take them to a space or aeronautics museum. For a real NASA vacation, visit Cape Canaveral in Florida to watch a rocket launch or hear an astronaut discuss their experiences. While there, you can even tour the Kennedy Space Center to see astronaut artifacts and moon rocks and learn about how shuttles work. It is many gifted children's dream to use their high IQ in a meaningful way, and learning about NASA at a young age may help them find a potential career path.