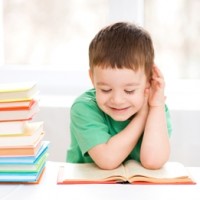 By FunEducation News on August 6, 2014 in Kids IQ Test Information

Researchers at Edinburgh University in Scotland and King's College in London conducted a study to determine the impact of early reading on intelligence. The findings indicated that children who have strong reading skills are more likely to develop high IQ scores in adolescence and early adulthood. Researchers discovered this correlation by studying over 2,000 sets of identical twins.

Isolating reading abilities
Researchers decided to study identical twins as a way of creating a control. Both children have the same genes and grow up in the same environment, so any developmental differences can be attributed to individual experiences. Furthermore, testing twins was important in this particular field because linking intelligence with reading in the past has been tricky. According to The Herald Scotland, previous studies have tested how parents reading to their children helps improve intelligence. However, this is problematic because parents who read also tend to have a high intelligence, which they pass on to their kids.

In regard to the twin study, researchers had each child take a reading and intelligence test when they were ages 7, 9, 10, 11, 12 and 16. The results showed that children who read often and well in childhood had higher IQs than their peers by the time they hit their teenage years. Because personal experience differentiated each child's reading development, researchers hypothesize that teaching and other instruction played the greatest role in helping students become good readers.

"Since reading is an ability that can be improved, our findings have implications for reading instruction," Stuart Ritchie, who led the study and is a research fellow in psychology at the University of Edinburgh, said in a statement.

Improving reading skills
Researchers believe that the twins who became good readers, and who later developed higher intelligence, improved their ability to read thanks to the help of instructors or friends who also read. If that's the case, then you can certainly help your kids to read more often and with greater ability. Here are a few ideas you can use to support your children's reading development:

Provide the means: Your children can't very well pick up a book if they don't have access to one. Regularly take your kids to the local library, go to book fairs, start a home collection and purchase books for your children's birthdays.

Encourage their efforts: If you see your children reading, encourage them! Support their decision to pick up a book instead of watching TV. In fact, you can limit the amount of time your kids engage with video games and computers, and instead suggest they read.