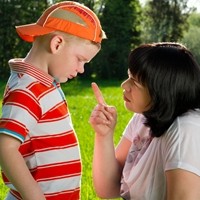 By FunEducation News on July 23, 2014 in Kids IQ Test Information

Disciplining your children is never easy – you know bad behavior needs to be corrected or your kids will never learn, but choosing the proper punishment is a challenge. Research on the subject often conflicts with years of family tradition. For instance, spanking is still a hot topic of debate in many American households. However, a study conducted by Murray Straus, a sociologist from the University of New Hampshire, may shed more light on the subject. Straus has contributed years of research on corporal punishment to the discussion, and according to him, a link exists between spanking and lower IQ scores.

Crime, punishment and stress
Before delving into the controversial world that is spanking, you should be clear on definitions. Corporal punishment refers specifically to a parent's or guardian's intent to cause pain, though not to injure, for the purpose of correcting bad behavior. While the safety of kids who receive spankings is not necessarily in jeopardy, the experience is still stressful.

When a parent announces that a spanking will occur, a child knows he or she is about to feel pain. The anticipation of the pain creates panic. Straus's research notes that it is this stress that distracts kids when they try to learn. Research on poverty has revealed much of the same – people who are under stress can't focus on learning, which causes them to develop a lower IQ than their peers who can focus.

Straus also independently researched the link between child IQ and spanking in a similar way all over the world. He discovered that, internationally, spanking seemed to be linked to a lower IQ. However, he believes that it's not necessarily corporal punishment that causes a decreased IQ. Perhaps kids with lower IQs act out more, causing parents to spank them. Straus noted that low IQ leading to misbehavior and punishment leading to a decreased IQ are both possible causes for altered intelligence.

From underdog to physicist: The story of an autistic genius
Study links reading at a young age to intelligence in teenage years