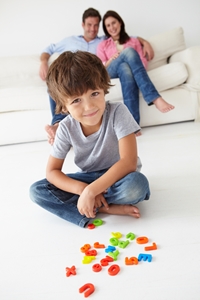 By FunEducation News on November 20, 2014 in Kids IQ Test Information

Synesthesia is a condition in which people's minds crisscross sense perception abnormally. For example, people with synesthesia may "see" a sound or "hear" a color, an experience that baffles people with typical senses. While the condition isn't well understood, it is somewhat common. According to a new study conducted by the University of Sussex and published Nov. 18, 2014, 1 in 23 adults has synesthesia. Researchers sought to discover whether the condition is genetic or learned as a result of toys kids play with (such as letter blocks that are colored). They discovered that people without the condition can experience similar symptoms, and that synesthesia training may even boost IQ.

Simulating the experience
Researchers put 14 participants through a 9-week training course to see if they would experience the typical symptoms of synesthesia. After the program, the adults developed color-letter connections and tested positive for the condition. The results indicated that adults can be trained to perceive the world in a different way cognitively. What's more, the study showed that because training evoked symptoms of synesthesia, it could be possible that the condition develops as a result of environment, though that doesn't rule out the possibility that genes factor into it. However, researchers noted that the training was not permanent – about three months after working with researchers, participants largely lost the associations they developed.

Surprising results
In addition to discovering that synesthesia-like experiences can be induced, researchers stumbled upon an unexpected result: Participants who underwent the training experienced an increase in IQ of about 12 points. The control group, which did not undergo the synesthesia training, didn't gain IQ points.

"The cognitive boost, although provisional, may eventually lead to clinical cognitive training tools to support mental function in vulnerable groups, such as attention deficit hyperactivity (ADHD) children, or adults starting to suffer from dementia," Dr. Daniel Bor, who co-led the study, said in a statement.

It's unclear what about the cognitive training induced improved IQ. It could just be that participants learned to perceive senses in another way, thus training their minds.

Continuing the research
Researchers at the University of Sussex have long studied synesthesia, what it does and what causes it. The school's website offers resources for people experiencing synesthesia. This study provides a new perspective on how people develop the condition, though additional research is needed to see how genetics factor into the equation.

Did you know? 5 Quick facts about IQ
The cause of the Flynn Effect