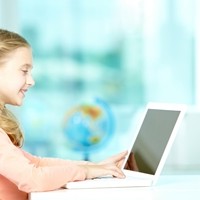 By FunEducation News on July 16, 2014 in Kids IQ Test Information

Parents all hope their kids will have high IQ scores, get into good colleges and lead successful lives – that's just part of being a parent. This could be why some adults praise their children. Kids who do have brilliant minds are frequently called "gifted" and are told they'll achieve great things. However, the practice of telling kids they will absolutely succeed (they have to because they're so smart) could have the opposite effect.

Expecting success
Joan Freeman, a psychologist at Middlesex University, has been conducting studies for years on intelligent children and how they develop over time. In fact, many of the kids she started following are well into adulthood now. All of the children had good IQ scores and were labeled as gifted. Freeman found that some of the children, who were all projected to go on to do great things, never reached their full potential. Life seemed to get in the way. For instance, many kids put building a family ahead of career success. Others never wholeheartedly pursued life goals.

According to The Star, numerous studies on gifted children have led researchers to believe that intelligent kids may not try hard. They're told throughout their childhood that they will, undoubtedly, do great things with their lives. Because these kids are so smart, they must achieve brilliance, right? Unfortunately, these high expectations cause many children to give up once the going gets tough. They were led to believe they'd breeze through life, which most people know is a false expectation.

Life with or without great success
Despite the fact that not all very intelligent kids earn Nobel Prizes, they can and do lead happy lives. Creating an amazing invention isn't the only way to find fulfillment. Of course, some kids do end up achieving incredible things. Many experts believe discipline has more to do with success than intelligence. People who are exceptionally gifted in their field had to work hard to get there.

Malcolm Gladwell, in his book "Outliers," noted that a person must put 10,000 hours into a single activity before he or she masters it. Whether or not this is absolutely true hasn't been tested, but the idea makes sense – as they say, practice makes perfect. Children who start working on their desired skill at a young age will, logically, reach their 10,000-hour goal earlier than peers who began their journey later.

Kids who are smart and persistent are perhaps the best suited to future success. Their intelligence will help them as they work toward mastering a skill. However, parents should be careful when giving their children IQ tests. Remember that the score is just a number.

Science prodigy studies the mysteries of intelligence
From underdog to physicist: The story of an autistic genius