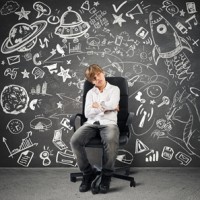 By FunEducation News on July 17, 2014 in Kids IQ Test Information

Jacob Barnett's story is the ultimate underdog tale. The 15-year-old from Indiana has an IQ score of 170, 30 points above the genius level. His adept mind led him to college at a young age. In fact, he began auditing classes on condensed matter physics at Indiana University-Purdue University Indianapolis when he was just 8 years old. Jacob is currently working toward his master's in quantum physics and is developing his own theory of relativity.

With all Jacob has accomplished and is on the road to achieving, you may be surprised to learn that the boy genius has moderate to severe autism. However, as you can see, Jacob's diagnosis hasn't stopped him from excelling.

Overcoming autism
According to the New York Daily News, Jacob was diagnosed with autism at the age of 2. Doctors told his parents that he may never learn to tie his shoes, let alone read. Based on doctor recommendation, Jacob's parents sent him to special education programs to prepare him for school. However, Kristine Barnett, Jacob's mom, could see the schooling wasn't working for her son. Jacob became more reclusive while at school, a state of being Barnett feared her son wouldn't come out of.

Barnett did notice that Jacob was happier at home. He would complete complex puzzles, create detailed maps of places they visited and ask lots of questions. When Jacob was only 3.5 years old, his mother took him to a planetarium. A professor was lecturing at the museum that day, and Jacob and his mom sat in. Jacob asked numerous, in-depth questions throughout the presentation.

Having witnessed Jacob's incredible mind and the way school seemed to take a toll on him, Barnett decided to complete his early education at home. It was during this time that Jacob began to shine.

To (relative) infinity and beyond
Barnett educated Jacob by surrounding him with things he liked, whether it was music, art, or space and time. Instead of simply going through ABCs and 1, 2, 3s, Jacob got to explore the topics he really loved. This environment was just what Jacob needed. By age 8, he was auditing college classes. By 11, he was properly registered at IUPUI. According to the Daily Mail, older students would come to Jacob for help with their physics homework.

Jacob has given lectures during TED conferences. In his spare time, Jacob is also piecing together his own theory of relativity, a feat that experts watch in anticipation.

"The theory that he's working on involves several of the toughest problems in astrophysics and theoretical physics," Scott Tremaine, professor of astrophysics at Princeton University, wrote to the family in an email. "Anyone who solves these will be in line for a Nobel Prize."

One Response to From underdog to physicist: The story of an autistic genius