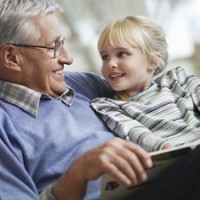 By FunEducation News on May 12, 2015 in Kids IQ Test Information

Younger generations are waiting longer to have children, but how does that affect their kids? Numerous studies have looked at how different parental traits affect children's IQ scores, and researchers agree that IQ can be influenced by factors like parents' intelligence or educational attainment. But studies are also showing that the age of mothers and fathers at the time of their children's birth could play a part in the offsprings' intelligence later in life – in particular, the father's age. Read on for how advanced age of parents can affect kids' IQ scores:

Advanced paternal age and IQ
A 2009 study published in the scientific journal PLOS Medicine found that offspring of older fathers are more likely to have neurocognitive impairments than those with younger fathers. In other words, the older his or her father, the more likely a child may be to have reduced intelligence along with cognitive conditions like dyslexia, autism or even schizophrenia. Interestingly, when looking at advanced maternal age, the opposite was found to be true. Children of older mothers scored better on the measures of intelligence (including the widely used Stanford Binet Intelligence Scale). Researchers said it may not be the biological age that matters most for these results, but the type of home environment provided by older mothers and fathers.

Parental age vs. parental intelligence
Not all researchers agree that the correlation between advanced paternal age and children's IQ scores is significant. A more recent study published by PLOS ONE in 2014 tested the theory while also controlling for the parents' IQ scores. Researchers found that taking parents' intelligence out of the picture reduced the age-IQ association, which could mean that parents' IQ matters much more than their age.

However, most research does agree that, even if advanced paternal age doesn't affect intelligence, it could still play a large role in the likelihood of other cognitive impairments, like autism. Among various other research, one 2006 study published in JAMA Psychiatry found that children of men who were over age 40 when they were born were almost 6 times more likely to have autism than children born to men younger than age 30.

Clearly, advanced paternal age has some affect on children's cognition, but more research may be necessary to prove it can significantly affect IQ scores.

EQ or IQ: Which matters more?
Zap your way to a lower IQ score