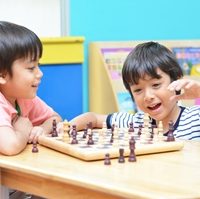 By FunEducation News on December 19, 2014 in Kids IQ Test Information

Plenty of movies and television shows feature scenes in which the protagonist and antagonist square off in a game of chess. Sometimes, two heroes of the film play one another. No matter who's on opposite ends of the chess board, filmmakers add such scenes to show off a few characteristics of the cast. This person is smart because he or she can best the other person. Or these characters may just be having a conversation, but they're really fighting through chess. The board can be a metaphor or a testament to intelligence. Why is that? What is it about games that we associate with cognitive ability? Why do we pit Sherlock Holmes against James Moriarty on a checkered playing field? Here's a look at the game we link to intelligence and why we do so:

Chess
Chess is perhaps the game most synonymous with IQ, which is why we see it all over film as a representation of intelligence. Let's examine the theories behind chess. Players must think ahead and plan their moves based on what they believe their opponents will do. They must also utilize the moves available to their pieces by picking out the strengths of each piece and putting it to the best use possible. In essence, chess requires critical thinking, problem solving, and the ability to predict and analyze. The game is very cognitive and strategic. For these reasons, players who are very good are often thought to have a high IQ.

Neuroscience of games
A study conducted by German researchers analyzed the brains of chess experts and novices using MRIs. Researchers showed both groups chess positions and geometric objects to see how their brains reacted to each item. Furthermore, participants had to identify the things they were shown. The experts and novices had the same reactions to geometric shapes, and the MRI scans revealed that their brains lit up in the same areas. However, experts were faster and more accurate at identifying positions in chess, which comes as no surprise.

The real difference lay in MRI scans. When looking at chess positions, experts' right hemispheres, which are associated with pattern recognition, were lit up. Amateurs did not show the same mental reaction on the brain scans. This study indicated that expertise in chess is an acquired skill that can improve the brain's pattern-recognition abilities.

Furthermore, other studies do link IQ and chess. A study conducted in Venezuela discovered that children who took chess classes saw an increase in their IQ scores.

From research to media, we have commonly portrayed chess as a measure of IQ, and that trend does have basis in science.