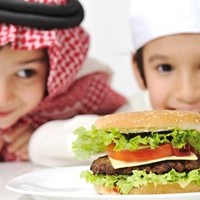 By FunEducation News on January 5, 2015 in Kids IQ Test Information

A fast-food cheeseburger sure smells and tastes good, not to mention it's inexpensive to buy, but consuming the item doesn't lead to positive outcomes. Most people understand that eating junk food regularly can cause health problems over time, such as high blood pressure and weight gain. However, few think about the consequences their diet has for the brain. According to a study published in the journal Clinical Pediatrics, IQ and fast food may be linked, and not for the better.

Supersized results
Researchers used data from the Early Childhood Longitudinal Study-Kindergarten Cohort to see how often students in fifth and eighth grade ate fast food. The data also included students' test scores for reading, math and science. Respondents filled out a questionnaire, noting that they ate fast food zero times over the last week, one to three times, four to six times or every day. Only 29 percent of students said they had not consumed any fast food the week before filling out the questionnaire, and 10 percent said they ate it every day. Another 10 percent indicated eating out four to six times a week.

Relating fries to figures
The study noted that the relationship between academic performance and fast-food consumption is a correlated one, not a causal one. Additionally, researchers did not analyze what components of fast food (high fat, high calorie, etc.) were most responsible for kids' minds working slower. One thing is clear, however: The less fast food kids eat, the better off their intellects are.

"We're not saying that parents should never feed their children fast food, but these results suggest fast-food consumption should be limited as much as possible," Kelly Purtell, assistant professor of human sciences at The Ohio State University and study lead author, said in a statement.

Social issues with eating out
The study brings to mind other issues relating to food. Many communities across the country are what experts call food deserts. These areas have little to no access to fresh ingredients and have fast-food restaurants in abundance. People who live in food deserts tend to have a low income and so purchase fast food because it's affordable and accessible.

Unfortunately, the prevalence of food deserts may only exacerbate the eating of junk food, which is linked with poor performance in school.