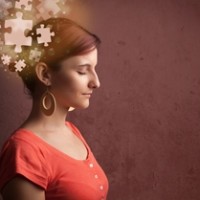 By FunEducation News on January 12, 2015 in Kids IQ Test Information

According to the Mayo Clinic, schizophrenia is a mental disorder often passed genetically. Those who are predisposed may begin showing symptoms in late adolescence to early adulthood. Unfortunately, this disorder, which may cause delusions and other issues, is chronic, though it can be managed with proper medical care. For those with a family history of schizophrenia, aging can be scary, as some fear they'll develop the illness. However, according to a new study published in The American Journal of Psychiatry, people who have high IQ scores may be less prone to developing schizophrenia, even if it's in their bloodline.

Risk factors
The study looked at data for more than 1.2 million males living in Sweden between 1951 and 1975. Each participant took an IQ test at the ages of 18 and 20, and researchers tracked any instances they were hospitalized for schizophrenia, even after the study period ended. Many of the men in the study were siblings, which helped researchers compare heritability and IQ. In fact, the results indicated that those who had high IQs were less likely to succumb to their predisposition than those who had low IQs, a phenomenon that could be seen in sibling cases as well.

"If you're really smart, your genes for schizophrenia don't have much of a chance of acting," Kenneth S. Kendler, professor of psychiatry and human and molecular genetics at Virginia Commonwealth University and study lead, said in a statement.

While intelligence shielded individuals from developing schizophrenia, those who had a low IQ were more likely to have the disorder. Researchers explained that how far one deviates from one's genetic disposition for IQ is indicative of schizophrenia risk: If a person's family has an average IQ, historically, but the person has a much higher IQ, his or her risk is diminished. Conversely, if a person has a much lower IQ than others in the family, his or her risk increases.

What's more, researchers warned that a high IQ does not guarantee protection from one's genetic predisposition. A very intelligent individual with a family history of schizophrenia still has some risk.

Dispelling the myth
In the past, many have believed that brilliance and mental instability have gone hand in hand. While this can occur, it's not the norm, and being smart doesn't increase a person's chance of developing mental disorders like schizophrenia.

Those who have a family history can assess their risk and the risk of their kids by seeing a doctor who specializes in treatment of the disorder. And now, scientists know, IQ is another indicator.