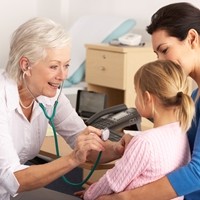 By FunEducation News on June 25, 2015 in Kids IQ Test Information

Children who have to undergo surgery before they're 4 years old may experience some long-term negative effects, but not because of the operation – rather, because of the anesthesia. A new study has discovered some alarming cognitive outcomes of using general anesthesia on young children. The research, which was published in the scientific journal Pediatrics, discovered that children who'd been exposed to general anesthesia scored much lower on IQ tests and listening comprehension assessments later in life than children who hadn't.

How the study was conducted
Researchers at the Cincinnati Children's Hospital Medical Center studied 106 participants between the ages of 5 and 18; 53 had undergone general anesthesia before the age of 4, while 53 had not. Other factors that could affect IQ scores, like age, right- or left-handedness and socioeconomic status, were all controlled. Although those who had been exposed to anesthesia still had IQ scores within the norm, they had lower scores than the other participants. Researchers also discovered that the children who showed lower IQ and comprehension scores had lower gray matter density, which they believe to be another effect of the anesthesia.

What do researchers say?
According to Andreas Loepke, head author of the study and an anesthesiologist in the Department of Anesthesiology at Cincinnati Children's Hospital, the study is alarming because the surgeries that children undergo are largely to treat life-threatening conditions and other serious concerns.

"The ultimate goal of our laboratory and clinical research is to improve safety and outcomes in young children who have no choice but to undergo surgery with anesthesia to treat their serious health concerns," Loepke said in a statement. "We also have to better understand to what extent anesthetics and other factors contribute to learning abnormalities in children before making drastic changes to our current practice, which by all measures has become very safe."

Researchers also noted that the outcome of the study is not altogether unexpected. Previous research they've done on laboratory rats and mice has shown that surgical anesthesia can lead to cell death and the permanent loss of neurons.

As Loepke said, though, the surgeries young children undergo often can't be postponed or avoided, which means the negative effects may not outweigh the need for general anesthesia. Loepke and his fellow researchers said that more research must be done to determine possible solutions to the problem. They believe further studies could help the medical world come up with strategies to mitigate the long-term negative effects of anesthesia.