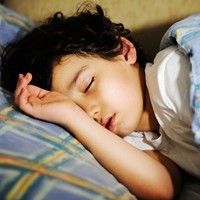 By FunEducation News on December 3, 2014 in Kids IQ Test Information

Most people know intuitively that losing sleep causes them to perform poorly. Adults who don't get enough shut-eye struggle through work the next day, and kids who miss out don't do as well in school. Despite our awareness of the role sleep plays in our ability to focus during the day, many brush off recommendations and stay up late. However, the consequences of dismissing our bodies' cries for downtime can be fairly steep, impacting long-term cognitive function and even IQ.

The sleeping brain
When you sleep, your brain goes through cycles of rapid eye movement. REM is the time in which you dream. While watching interesting stories play out in your unconscious mind is certainly entertaining, a lot more goes on while your eyes are shut. According to a study conducted by the University of Rochester, sleep gives your brain the chance to flush liquid toxins. While you're awake, your brain collects toxins that could do potential damage when left there for extended periods. Fortunately, your body has a mechanism to clear them out: sleep. During your rest, your brain cells literally shrink, allowing the toxins enough space to escape.

This finding is incredibly important, as brain toxins have been linked with diseases like Alzheimer's. In fact, researchers injected mice with Alzheimer's-related hormones and watched them while they were awake and asleep. The hormones dissipated more quickly in mice that slept. As such, researchers believed that sleeping is crucial for preventing Alzheimer's and protecting memory.

Without sleep
Not only does sleep get rid of harmful toxins, but it also helps the brain think more effectively. Both adults and kids lose brain power when they miss out on sleep, but the consequences are steeper for kids. Researchers at the University of Virginia discovered that missing even a single hour of sleep can cause kids to lose potential IQ gains.

Suratt had kids take a vocabulary IQ test – half of them got the recommended amount of sleep (about 10 hours) and the other half got one hour less. Those who missed out on shut-eye scored about seven points lower than their peers.

Adults and kids alike should be getting an adequate amount of sleep each night to promote strong IQ, prevent future cognitive impairment and remain focused throughout the day.